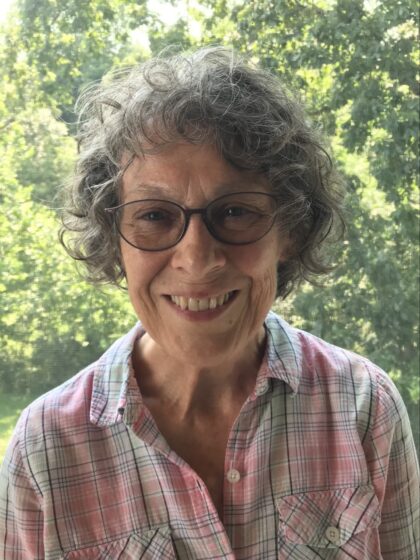 Rebecca was raised on a small family farm in central Michigan. Becoming restless, she left home at nineteen to explore other parts of the U.S. After several futile attempts at college and numerous gap years, Rebecca attended Salve Regina College in Newport RI and graduated with a BS in nursing. She was also swept off her feet by husband Michael while in Newport. After graduation she practiced as an RN in Seattle, WA. Michael and Rebecca moved to Carlisle in 1989 where she practiced nursing at Carlisle Hospital, Sadler Clinic, the Nursing Department at Harrisburg Area Community College and also earned a MS in Nursing.

Rebecca joined UUCV in 2018. She serves on the Hospitality Committee, helps maintain the church gardens and contributes to the Carlisle Cares Meal Program.

Rebecca is retired and enjoys gardening, observing wildlife, spending time outdoors and partaking of delicious meals prepared by family and friends. She has three daughters and the two most wonderful granddaughters in the entire world.