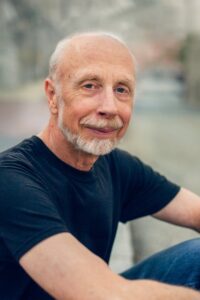 Joseph Osborne is filling in as Music Coordinator until a long-term replacement is hired. Eccentric and eclectic, he has done a lot of music:  built harpsichords, played in an Irish band, & tuned pianos. His primary passion is musical theatre where he has done acting, singing and produced a show. Currently he is writing a full length musical.

He has started many businesses, some of which actually made money. He designed, built and sold robots and was an Apple Computer dealer.

He once drove a Manhattan taxi, is a licensed sailplane pilot and likes to create programmed, interactive kinetic sculptures.

Midge, his wife, was a professional landscaper who now plays a lot of bridge. They live in a solar house which Joe designed in 1984 with the first Macintosh that ever came out.

They have two children, adopted from Guatemala, now in their thirties.

Reach out to Joe at uucv@osbornej.com