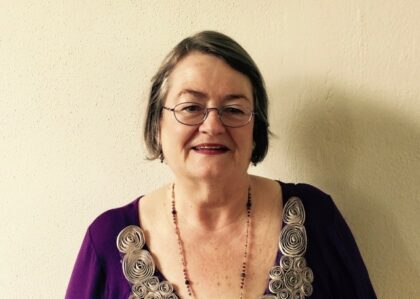 Gisela was born in 1946 and grew up in West Germany. At age 20, she came to the U.S. on an exchange program from Bonn University to Washington State University. There, she met her future husband, and completed her B.A. and M.A. in Foreign Languages. After having lived in Beirut, Lebanon, for four and a half years, she came back to the U.S. with her husband and son, and started back in graduate school to work on a Ph.D. in German Literature from Harvard University. She began teaching at Dickinson College in 1985, and retired from that job in 2008.

Gisela and her second husband, John Kallmann, joined UUCV in 2006. Over the years, she has served UUCV in a number of functions:  on the membership committee, as the editor of the newsletter, on the Small Group Ministry Coordinating Board, as a Small Group facilitator, as a worship associate, and now on the Board of  Trustees. In retirement, she has found a new social, intellectual, and spiritual home in this church.

After retiring, Gisela found other realms of activities and service besides in our church:  she was on the board of the RPDC (retired professionals of Dickinson College, an organization of about 160 members), and she participated in a couple of subgroups of the RPDC:  a music group and a poetry group, which she has been leading since 2017. She also has accepted the occasional private (adult) student who wants to learn German.

Gisela enjoys reading, all kinds of music, going to museums and films, Yoga, swimming, and traveling in countries whose languages she has learned. She keeps in touch with a large family both in this country and in Germany as well as friends around the world.